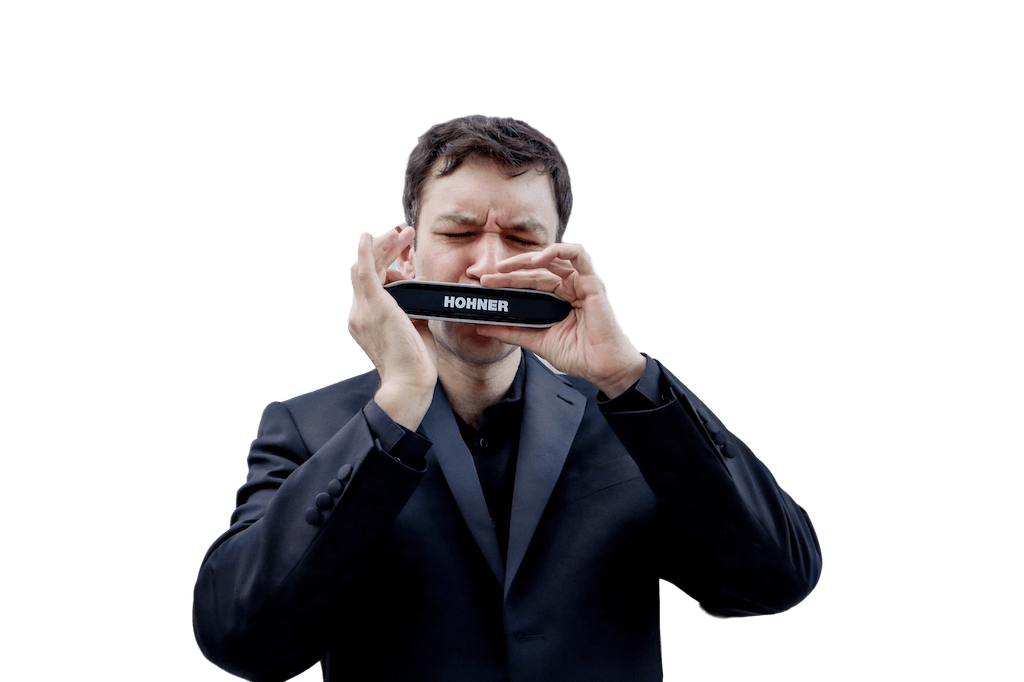 Hi, I'm Yvonnick Prené. I will help put you on the fast track to learning and playing the Chromatic Harmonica more efficiently.

WHAT CAN I HELP YOU WITH?

Get Full Access to a Library of Over 700 Lessons

Your journey to become a better harmonica player starts here. Whether you are just starting out playing the chromatic harmonica, or you are a confirmed player looking to improve - We have something for you in our course library. With over 50 hours of step-by-step videos and hundreds of audio examples, downlaodable harmonica tabs and sheet music will help you to truly raise your playing to the next level.

YOU DON'T NEED TO READ MUSIC!

Although every lesson comes with a music sheet, you will be able to learn visually through the harmonica tabs and easy to follow steps. 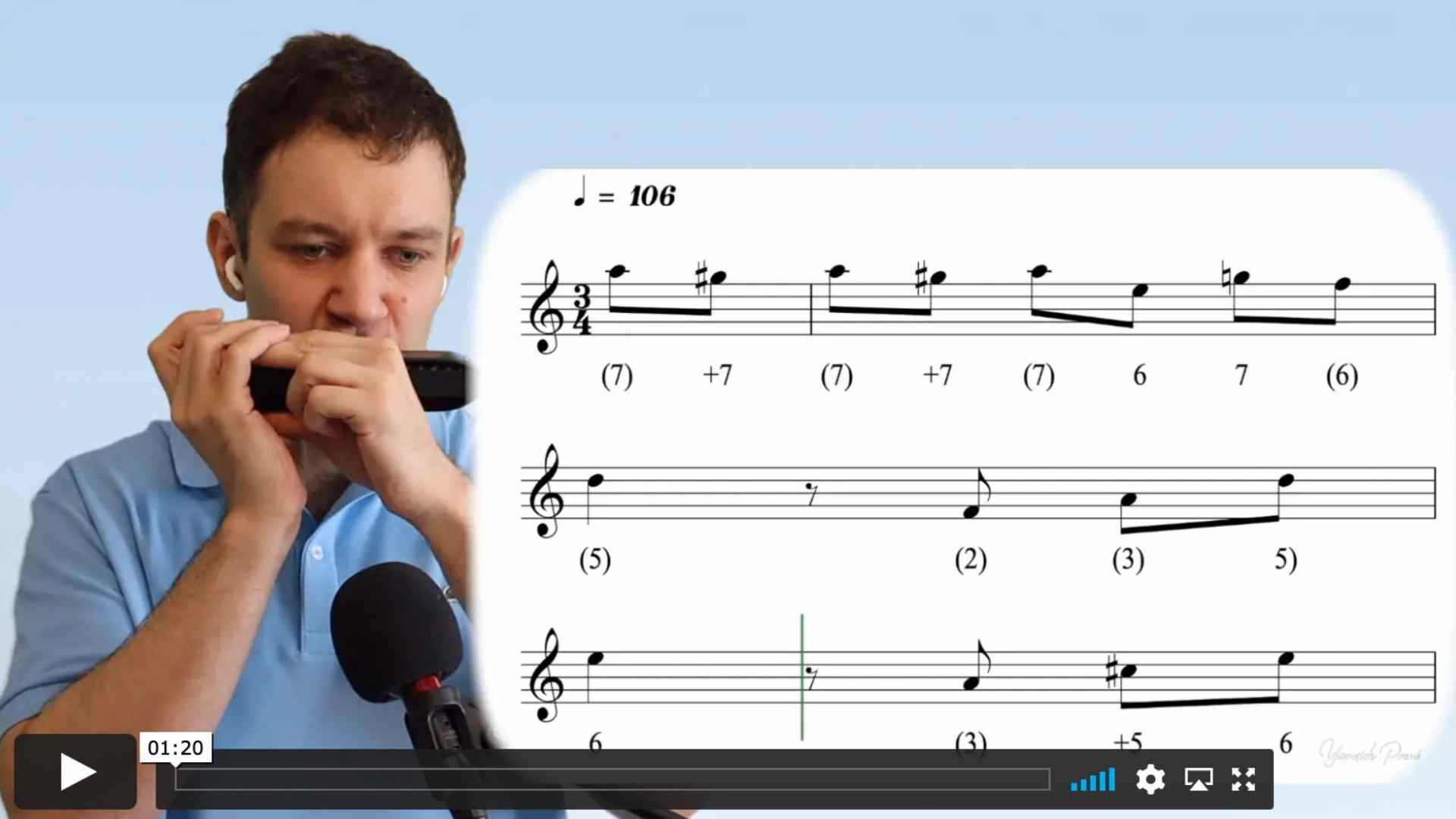 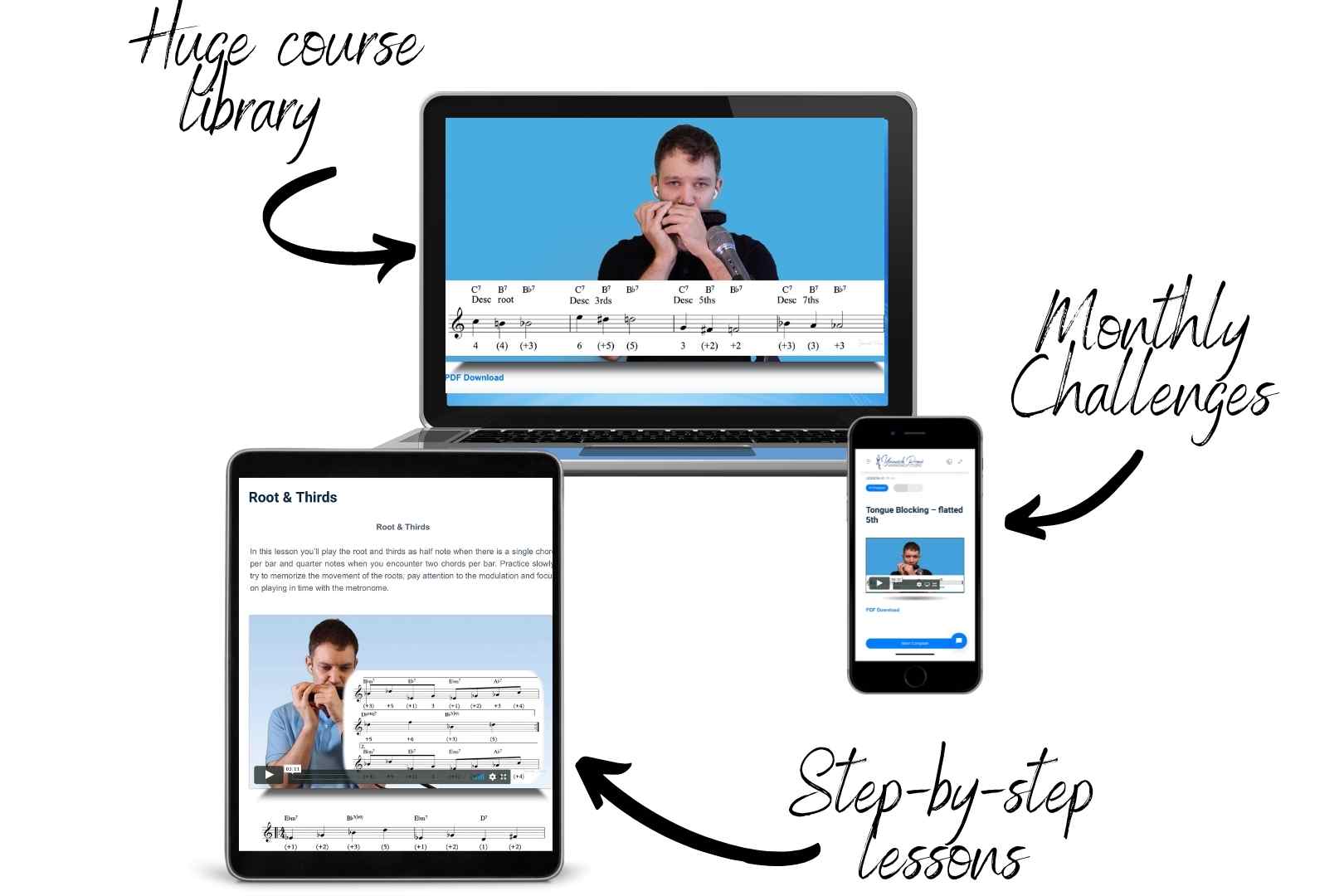 NO TEACHER NEAR YOU?

YOU CAN LEARN ONLINE

Submit your video or audio of your playing in the Community Forum, get custom feedback, personalized assignments and improve. You can get help whenever you need it. 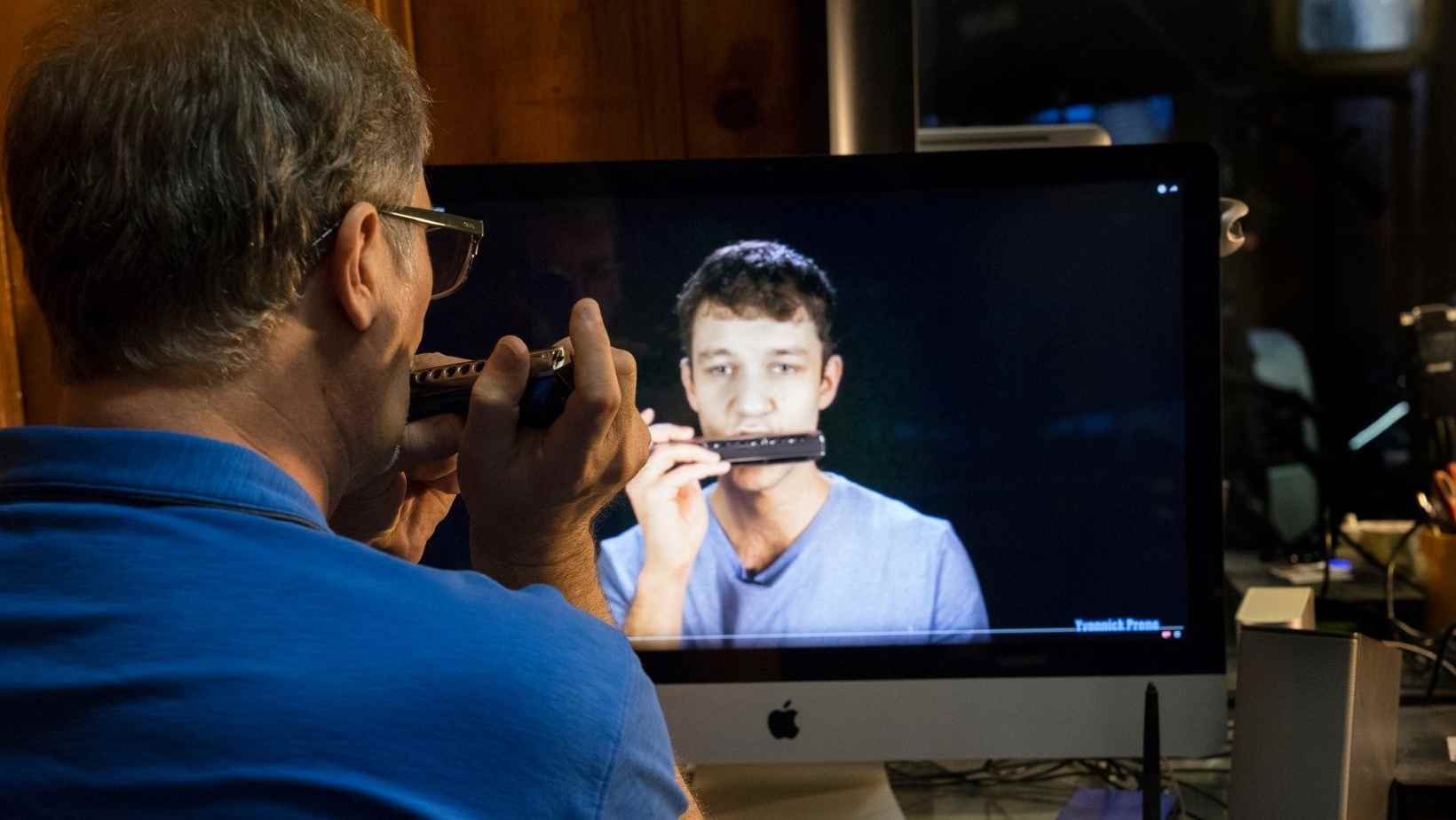 Showcase your playing, play in the virtual ensemble, discuss topics in our forum, participate in our "Monthly Transcription Challenge" where you will develop jazz vocabulary and train your ear. You’re not learning alone, our community is here to help you!

The masterclasses allow you to learn and practice harmonica techniques, scales, arpeggios and improvisation with Yvonnick, in real-time from the comfort of your home.

TESTIMONIALS FROM OUR ACADEMY MEMBERS:

"As a professional jazz pianist and chromatic player for the last 25 years, I am very excited to be studying at Harmonica Studio. It has motivated me to up my game, practice daily and determine to play gigs.  This is a groundbreaking and Innovative school founded by a great teacher and musician.  Five stars!!"

"My name is Glenn Firester and I'm a jazz drummer, chromatic harmonica player and reluctant piano player. I have immersed myself into the Harmonica Studio as a means to learn more techniques, phrasing and  musical vocabulary. Yvonnick is on the leading edge of Jazz Harmonica as demonstrated from his amazing body of recorded work. He is truly an inspiration and his website provides all the building blocks and tools to improve everyone's playing. I highly recommend you check it out!"

"I joined in September 2019. It took me many years to finally discover a thorough Jazz course at an affordable price. Yvonnick must have spent hours, if not months putting together a fantastic course with theory, demonstrations, play-along exercises, and song analysis. I am progressing through it all in small bites, and am very pleased with my progress."

Ever since moving to New-York City from his hometown Paris, France, composer and educator Yvonnick Prene has fast become one of the rising stars in the harmonica world. He has performed and recorded with top Jazz artists like Pasquale Grasso, Peter Bernstein, Kevin Hays, along with touring the USA, Europe and Africa.

Yvonnick was already playing the harmonica professionally at the age of 17, in Parisian club scenes. He later earned a master’s degree in music at the Sorbonne University in Paris, in 2011 and while still enrolled, he moved to New-York City to receive multiple full-tuition scholarships at the City College of New York, Columbia University and at The New School for Jazz and Contemporary Music.

Yvonnick's sixth album "LISTEN!" is scheduled to be released in 2023 on Sunnyside Records. On top of his exciting work as a bandleader, Yvonnick is the founder of the New York Harmonica School, author of multiple books and a Hohner Artist.

The most valued harmonica instructor in the world... "Finding the Harmonica site of Yvonnick Prene is truly one of my really great joys. The Harmonica studio is giving me a superb training structure to follow in playing, and I now practice the harmonica daily and I'm improving my playing day by day! ” I now play daily and improved by leaps...

"I love Yvonnick’s new site! Well worth the minimal fee for the membership seeing all the material I’m getting :) I now play daily and have improved by leaps and bounds. Yvonnick takes you through a series of exercises focused on scales, arpeggios and a host of melodic and rhythmic phrases. Develop your chops for Jazz improv over familiar jazz Standards such as "All The Things You Are", "Moon River", "Bluesette", "Blue Bossa" and a lot more. Whether you're just starting out or want to refresh the fundamentals to make sure you haven't missed anything critical that could slow your development as a chromatic harmonica player, this course is for you! This course will take you through music styles including Folk, Pop and Classical pieces with solfege and tablature.

Here's Everything You Get With Your Membership at My Harmonica Studio Today: 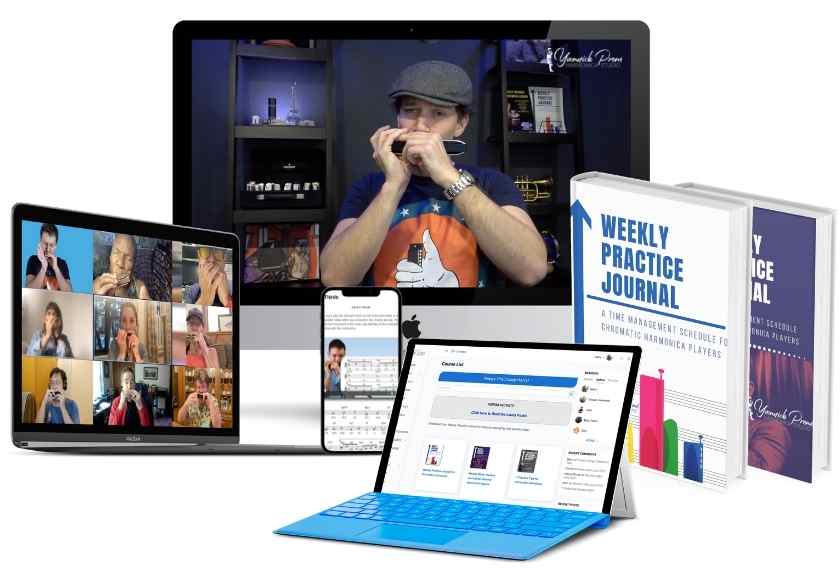 Let's Get Serious About Your Playing

Education can be costly

Here are answers to some frequently asked questions:

Can I give a course as a gift?

Yes. You sure can!

You can purchase gift certificate for any membership.

Is Harmonica Studio available in other languages?

Yes. If you need to set the your text to a different language, you can do it with Google Translate available for free at Chrome Web Store. This will change the language of menus, texts and settings. The videos will remain in english.

Can I adjust the speed of the video?

Absolutely! You can slow down or accelerate any video easily through the speed control feature on our Vimeo video player.

Can I experience the full website on my phone or tablet?

Yes! Our website has full functionality on all platforms including iOS and Android mobile devices, phones, and tablets.

How long do I have access to the course?

You have 24/7 access from the date you register on the site until you decide to stop your monthly or yearly membership.

What is included in my membership?

Every ﻿﻿﻿paid﻿﻿﻿ subscription to My Harmonica Studio comes with:

After registering for the monthly, yearly or lifetime membership and completing payment on PayPal or Stripe you will become a member of My Harmonica Studio. You will be able to login at anytime using the membership login form, on the right corner of the homepage. Once you are logged in, you will see all the courses you have signed up for.

Do you offer refunds?

If for any reason you are not completely satisfied with My Harmonica Studio or it just does not meet your expectations, you should notify us within 7 days from the date of the purchase and we will process your partial refund.

Out of your refund you will be charged transaction and processing fees of $10 if you signed up to the Monthly Membership and $20 for an Annual Membership.

There is no refund after purchasing a lifetime membership.

I'm a beginner. Is Harmonica Studio a good fit for me?

We offer courses ranging from beginning, intermediate to advanced players. I recommend to get started with the Harmonica Fundamentals course to learn the basics. You will be able to have to move freely between these different levels as often as you'd like.

I'm coming back to chromatic harmonica after a break - can you help me?

Picking up the chromatic harmonica after a long hiatus can feel difficult. Don't worry. A lot of our members haven't played since high school (30 years ago!). We have courses in Harmonica Studio to help you get back into playing and motivate you, while still having a ton of fun!

How do I get feedback from Yvonnick on my playing?

Yvonnick will personally review your audio/videos, posted via the “Student Video Showcase” and reply with constructive criticisms, to each and every one.

Am I locked into a long-term commitment?

No. You can cancel your subscription at any time directly in your account.